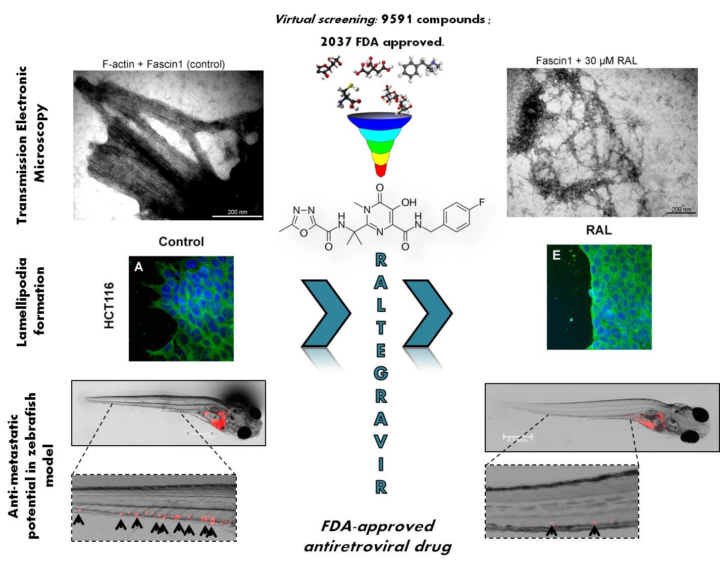 Tumour metastasis is the leading cause of cancer mortality and requires the formation of cellular protrusions on tumour cells that allow their migration, invasion, and proliferation to other tissues. Fascin1 is a key protein in the formation of these protrusion organelles, and it is overexpressed in human carcinoma’s tissues. Researchers from the UCAM, the IMIB-Arrixaca and the Universidad de Granada  identified a new indication of Raltegravir for its use in colorectal cancer treatment as a Fascin1 inhibitor. The mechanism of action is based on the inhibition of Fascin1, which prevents its action in cell invasion and metastasis.

Raltegravir (RAL) binds directly to Fascin1 molecules, inhibiting their action in the crosslinking of actin filaments into tightly packed parallel bundles, which is a process that allows the tumour cells to develop the required protrusions for cell invasion and metastasis. In vitro results have shown that RAL reduces the ability of Fascin1 to arrange packed bundles under control conditions. Therefore, RAL’s anti-tumoral effects are Fascin1-dependent, with potential therapeutic action in other high-expressed Fascin1 cancer types. RAL can be administered parenterally, orally, nasally, rectally, topically, or buccally, and is an FDA approved drug used in the treatment of HIV/AIDS.

The represented institutions are looking for a collaboration that leads to commercial exploitation of the presented invention.