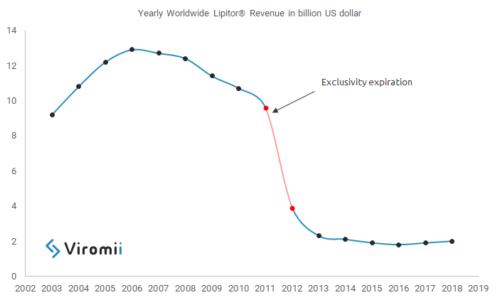 Lately, at Viromii, we have been working with some really interesting projects in the pharma industry, this has made us look a lot to patents, commercial rights and mechanisms to prolongate exclusivity over a molecule or drug. We have decided to start a series of posts on the topic and this first post is aimed to be the base for the following ones.

As at the beginning of every year, the list of drugs losing exclusivity during 2019 has been released. This year, Roche is the company that can suffer the biggest impact, as their exclusive rights to commercialize Rituxan, Herceptin and Avastin are at stake. Relevant patents covering Rituxan lapsed at the end of 2018 and competitors are ready to launch their biosimilars; in fact, in Europe sales of Rituxan (MabThera in Europe) dropped by 47% in 2018, after Sandoz and Celltrion started to commercialize their biosimilars.

Pharmaceutical companies invest and fight hard for keeping their exclusive commercialization rights over their blockbusters, when a generic enters the market sales can drop dramatically, some estimations show that in average sales can decrease between 37% to 48%, this is, for example, the case of Pfizer’s Lipitor® one of the bestsellers drugs worldwide in the history. In 2012 Pfizer lost commercial exclusivity (always keeping in mind that the timing varies among countries and legislations) over Lipitor® and soon generics were launched; this created a huge drop in sales, Lipitor® went from generating revenue of around $9.5 US bn in 2011, to $3.9 US bn in 2012, a decrease of 59% in revenues.

Lipitor® is one of the many examples, at some point all drug developers face the issue of losing control over their drugs, and therefore these companies have developed many strategies aimed to keep control and extend the exclusive rights over their blockbusters. Drug developers fight to stop generic introduction at the level of days; continuing with the example of Lipitor®, from 2011 to 2012, in only one year, the revenues dropped $5.6 US bn, which means $15.3 US million per day, $460.3 US million per month. These numbers are huge and can have an important impact on the financial statements of any pharma company, therefore they put a lot of effort, and sometimes get really creative, when trying to prolongate their exclusivity. There are different mechanisms available, ranging from creating a patenting strategy that allows to file later patents covering different aspects of the base compound of the drug, filing a patent infringement suit, extending the therapeutic use of the drug by finding new indications or, if possible, applying for orphan drug status. These are only some examples and different strategies suit better different cases, as well as the geographic scope and applicable legislation will make drug developers chose one mechanism or another.